While the tugboat, pirate ship, and biplane have been fighting each other in the above picture, I have been contemplating how to travel in time without the use of a time machine. If someone’s budget is small, or they do not want to deal with the scientific intricacy of building a successful machine, there are many other, more efficient methods.

As we have learned from Reading Rainbow, and other resources, travel is possible through reading. A good book, especially a primary source like a journal or diary, can be a portal to an unknown place. Our imaginations can take us to far off lands, places, and times. A whole unknown reality unfolds before us.

However, be careful if a strange looking man sits at the table across from you.

He places a book on the table. He talks cryptically of being taken to far off times and places, and opens the book. The words swirl and you find yourself pulled into the book and through time. You awake on a far away shore, a medieval castle rising above you. As a rock glances off your shoulder, you realize this is not your imagination. You are really here, and there is a mob of frightened peasants who believe you are a teleporting demon.

Similar to Sheldon’s questions of a Renaissance Fair’s historical accuracy on the Big Bang Theory, a Renaissance Fair is a place where space and time converge. In a few acres in Southern California, Pennsylvania, New Mexico, or other non-European places England, France, and Italy are combined (and most other European countries of the time period are forgotten).

A thousand years of European history are lumped together – medieval warriors pass Shakespearean actors while Queen Elizabeth apparently rules the whole continent. It is a wonderful alternate dimension where false-British accents are thrown about, and speech is elevated with a few “Huzzahs!” and “Thee’s” and “Thou’s”.

If an observer looks carefully enough, they will spy someone in gear from a popular fictional universe set in a vaguely medieval time.

Let me see. Pointy ears? You must be an Elf from Westminster.

Or, perhaps the pewter dragon sold to you by a peculiar looking man.

“This dragon has been passed down in my family for generations,” he says.

You accept, excited to add this to the collection of dragons on a shelf at home. You might have to add room.

After walking short way, you look back to thank the odd man. His booth has disappeared. In its place is a classic Medieval delicacy: Chocolate covered strawberries. You take a few more steps, and a purple fog swirls around you. You wonder, at first, if you have watched too many episodes of Once Upon A Time back-to-back.

The smoke swirls and consumes you, and you are flying through the air. You land on a shore. At first, you think you hear seagulls. As the smoke clears, you realize there is a group of people dressed as peasants throwing fake rocks at a young man in street clothes. You haven’t seen this activity at a Renaissance Fair before.

Then, a rock clips the young man’s head, and a cut appears.

You run toward the crowd, shouting for them to stop. The peasants turn and go still. Several of them say, “It is a noblewoman.”

You realize you should be more careful about acquiring free things at Renaissance Fairs.

3. Travel To Ancient Ruins And Find An Ancient Talisman

When my family and I saw an exhibition of the terracotta soldiers from China, we could feel the thousands of years they have existed as we stood in the room. There is an aura to an ancient place, a feeling of the countless feet that walked there centuries ago. As you walk among ruins, your imagination is transported back to a time and place, a glimpse of life long, long ago.

On the grounds of an Incan pyramid, you see a panther made of jade. You look around you before picking it up. You wonder who dropped it, or if it was left behind a thousand years ago. You take a few steps forward, when the floor drops out from beneath you.

You land on a shore, the humidity of the jungle evaporating as a cold breeze bites through your t-shirt. Across the shore, medieval peasants are bowing to a young woman in Renaissance garb. A young man in street clothes is running away from them and toward a row of hedges.

You wonder if you passed out from heat stroke, when the grumble of a wild cat sounds beside you. There, where the jade figure fell, is a live panther licking its jaws. Reminded you should have gone to the gym more often, you sprint toward the hedgerows to join the young man.

4. Hit Your Head And Pass Out After A Major Crisis In Modern Life

Well, my dear chap, it seems you hit your head.

Whenever life is too much, seek ways to fall and hit your head just hard enough to pass out, but not hard enough for permanent damage. You will find yourself transported to a time separate from your own, with all the key people and events for you to learn how to assert yourself and deal with the crisis in your modern life. Once all your lessons have been learned, you will awaken from a brief coma and realize you are in modern times. Then you will successfully apply everything you have learned to make your life perfect.

Today, however, you were using a ladder to hang a picture on the wall, when you fell. You blacked out, when you woke on the beach. You hadn’t planned on going surfing today. You rise, looking for your board, when you see a group of medieval peasants running toward you.

As you jump behind a hedgerow, a black panther streaks by, circling the peasants. A young woman in Renaissance garb leaps behind the hedgerow with you, and you crouch together, wondering what’s going on.

5. Find A Lightning Storm Large Enough To Open A Time Vortex And Jump Inside

Electrical storms are prime occurrences for time travel. Whether powering the flux capacitor in your Delorean, snapping around your flying telephone booth, or creating an anomolous vortex, it is a cost-efficient time-travel device. All a person has to do is wait for a large enough storm.

I currently am building a gigantic Tesla Coil, and waiting for a particularly cloudy day.

According to Time-Spectorometer, there are a group of random modern citizens stuck on a shore outside of a medieval castle with a mob of angry peasants and an ancient panther chasing them. If I can get the Tesla Coil to create a large enough electric storm, I might be able to help them get out.

My only other option is to jump into a bottomless pit with a watch broken by a lightning strike (and a working parachute, just in case.)

What is your favorite time travel method? What would you do if chased by an angry mob and a panther? Where would you want to travel in time? What festival or convention is the best convergence of time and space?

My friend Andres Salazar’s Kickstarter campaign is still going strong until April 21, 2014. If you like children, space, and bears, then you should check out Space Bear. 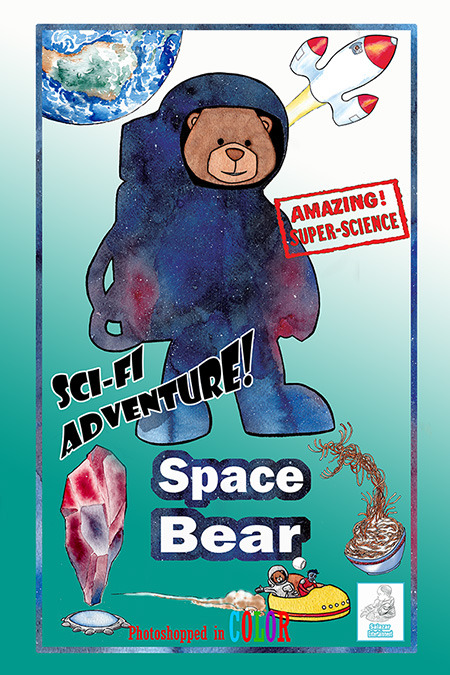