Welcome! L. Palmer is hard at work on the next chapter of The Pippington Tales. In the meantime, scroll down to explore her family-friendly tales full of magic, romance, adventure, and sensible heroes and heroines.

The True Bride and the Shoemaker

There is magic in the streets of Pippington, but most people are too busy to notice.

Shoemaker Peter Talbot needs a little magic. Cheap, factory made, shoes are putting him out of business, his nagging sisters will never let him rest, and his efforts to find true love are constantly thwarted by worldly fickleness. However, the gift of a wild primrose and a shipment of rare griffin skin are about to change everything…When beautiful handmade shoes begin appearing in his shop every morning, Peter is determined to find the source. What he finds instead will be far more exciting and wondrous than he could ever imagine.

The True Bride and the Shoemaker is the first of The Pippington Tales, introducing a city full of magic and everyday fairy tales for those willing to see them.

The Lady and the Frog 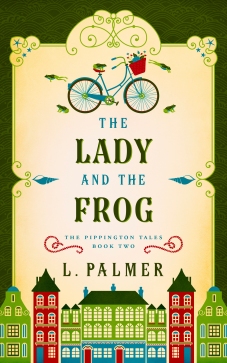 Welcome to Pippington, where motorcars bump down old city lanes, frogs transform into men, and mermaids just might be real.

Evelyn Havish is through waiting for Henry Kingston to look up from his ledgers and propose. But, when Henry’s brother Jack is transformed into a frog and trapped in a well, Evelyn must join the rescue. Armed with her training as a lady and a solid punch, Evelyn must outwit a scheming heiress, wrestle an octopus, and kiss far more frogs than a girl should be expected to. As she dives deeper into a hidden world of magic, she discovers Jack may not be the one who needs saving.

The Lady and the Frog is the second book in the Pippington Tales.

The Matchgirl and the Magician 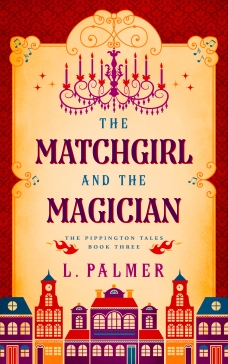 Welcome to Pippington, where motor cars bump down old city lanes, carpets can fly, and magic is a secret proper young ladies keep.

One fateful night, a child named Adeline lies alone in the snow. Fading into sleep, her only warmth comes from her matches and the embers of her hidden magic. As she succumbs to the cold of death, she is saved by Rompell, a stranger from a land of deserts and magic with secrets of his own.

Their lives intertwined, Rompell and Adeline become father and daughter. As Adeline becomes an elegant young woman, she fights to control and hide her growing magic in a world full of handsome young men, fine dresses, and her own grand romance.

When an enemy arises from the shadows of Rompell’s past, with ancient spells and dangerous magic, Rompell and Adeline risk losing all they have built together. As Rompell fights to protect his daughter, it may be Adeline who must risk revealing her powers and losing true love to save her father.

The Matchgirl and the Magician is the third book in The Pippington Tales and mixes Hans Christian Anderson’s Little Matchgirl, Rumplestiltskin, the legend of King Midas, and the magic of the Arabian Nights.

Here be dragons … and selkies and griffins and maybe even a mermaid or two. Twenty fantasy authors band together to bring you a collection of thrilling tales and magical monsters. Do you like to slay dragons? Or befriend them? Do you prefer to meet cephalopods as gigantic kraken or adorable tree octopuses? Each story focuses around a fantastic creature from folklore or mythology, and they range from light and playful tales for the whole family to darker stories that may make you wish to leave the lights on. These stories carry the Fellowship of Fantasy seal of approval. While our monsters may be horrifying, you won’t stumble into graphic content and constant swearing. Perfect for the fantasy lover who can’t get enough of mythical beasts

Can giant squids fly? Nadia DeLayne has one chance to preserve her partner’s legacy. She has a plan: build dirigible, avoid accidents, and convince the sentient kraken to fly. No problem.

Fantastic Creatures is an anthology from The Fellowship of Fantasy

Tales of Ever After: A Fellowship of Fantasy Anthology

Rescue a princess, meet a mermaid, win your reward.

The authors of the Fellowship of Fantasy tackle fairy tales from once upon a time to happily ever after. Explore twists on old tales and brand new magical stories. Meet feisty mermaids, friendly lampposts, and heroes who just might be monsters themselves.

This fourth anthology from the Fellowship of Fantasy will lead you on a quest for entertainment and storm the castle of your imagination. So make a wish and enter the deep dark woods to find stories that will make you laugh, shiver, and maybe even fall in love.