Last week it was announced the addition of Lupita Nyong’o and Gwendoline Christie to the cast for Episode VII. Joining with Carrie Fisher and Daisy Ridley, this doubles the number of women announced in the film.

Two more women for the film!

However, Nyong’o and Christie’s absence at the read through a few weeks ago is a bit concerning, and one question remains:

How Large Is Their Role In The Film?

There has been some speculation on who they will play. However, with the Expanded Universe being dissolved just like the Imperial Senate at the beginning of Star Wars: A New Hope, there is too little information to go on. I am am more concerned with how their female characters will be treated.

To explore this question, we are going to:

Princess Leia is strong-willed, gets things done, and fights alongside everyone else to defeat the empire. She may be a sister and a romantic interest by the end, but she remains and independent and fierce character.

Mon Mothma is the Thomas Jefferson of the Rebellion. More thoughts on this rebel leader, check out this post by Star Wars Anonymous

Oola is a hot slave girl in Jabba’s Palace and gets eaten by a rancor.

Background Females: A few females in the background, but none are featured pilots or soldiers.

I love the Original Trilogy, but human diversity is not its strong suit. At least Princess Leia is fierce enough to make the dearth of women less obvious, and Mon Mothma has a rare role as a leader unattached as mother, sister, or romantic interest.

Though strong willed when necessary, this political leader spends the last half of the Prequel Trilogy as Anakin’s worried love interest. While there is a brief scene mentioning the beginnings of the rebellion, she ultimately dies from heartache caused by Anakin.

Miraculously (?) gives birth to Anakin, raises him on Tatooine where they are both slaves, and then is kidnapped and murdered by Sand People – as a plot device to help Anakin turn to the Dark Side

Hired by Jango Fett to attempt to kill Padme. After a drawn out speeder chase, she is assassinated by her employer

Was featured in the trailer for Episode VII, and looked like she could be an interesting character. Then her 30 second scene came, and she was murdered by Clone Troopers.

Background Females: There are many civilians, soldiers, Jedi, and pilots, and even a few featured pilots and soldiers in Episode I. However, with all of the Clone Troopers being clones of a male, this eliminates the role of women in non-civilian roles later.

Among various other missed opportunities in the Prequels is the use of women as lead Jedi and key participants in the fall of the Republic. While Samuel L. Jackson is cool as Mace Windu (in Episode III – he isn’t given much to do in the first two episodes), how awesome would it have been to have a female Jedi kicking booty either instead of or with him?

Overall, J.J. Abrams has a fair track record with female characters, and easily a better record than the six Star Wars films so far. However, even a man known to create strong and interesting roles for females has some complications. Below is a spectrum of women in Abrams’ productions, from least to most dimensional.

The closest example we have to how Abrams will portray women in Episode VII lies in Star Trek. The portrayal of Uhura and Marcus is disappointing in Into Darkness (for a more in depth discussion, see my review of the film). While they are characters with personalities, intelligence, and moderate depth, by the end of the film they are relegated to worried ‘girlfriend’ and ‘daughter’ roles. This is disappointing because Abrams can do better, and worrying for Star Wars.

However, one difference between Episode VII and Into Darkness is that Episode VII has a smaller established cast, and therefore greater flexibility. Even with the alternate universe setting of the Star Trek reboot, it is still limited in comparison with Episode VII. Chekov must still be Chekov, as must be Scotty, Bones, and Sulu. The characters can be changed a little, but their core personality must remain. The characters in Episode VII are completely new, creating a fantastic great opportunity for independent and strong female characters in the Sci-Fi cinema.

It seems cinematic Abrams is less female friendly than television Abrams. Alice Dainard is a dimensional character, with an abusive father, a personality, and a life of her own. However, in the film, she serves the hero’s journey and not her own, and is a damsel in distress by the end.

While there is much melodrama in the course of Alias’ run, at its core Sydney Bristow is a strong, intelligent female. As the main character, her choices drive the narrative. Even in the first season, as much happens to her, she makes the choice to go to the real CIA and become a double agent. She makes the choice to make things right. If any of the new Star Wars women can be similar to her, it will be great.

Joss Carter of Person Of Interest

Carter is a single mother detective who doesn’t take any BS. Even in the face of a growing threat, she ventures in unafraid and ready to face the danger. While not the main character, she is a strong lead character… until this season, when she was murdered, in a show about preventing murders… However, before her untimely end, the show built in other female characters to fill the void. 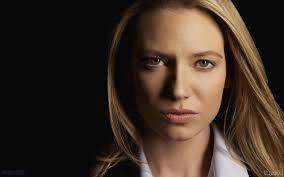 FBI agent, independent character, strong-willed, and with an alternate-dimension-evil-twin. In addition to being the main character, she remains a dynamic character throughout the merging of dimensions, the forgetting of years, and unknown supernatural events. Also, she does it in a business suit and not a tight-fitting leather catsuit.

The potential for great female characters is ripe for Star Wars Episode VII. Even if there are two minor characters, whether villain, or side-character like Lando Calrissian or Wedge Antilles, this would be a vast improvement for the cinematic franchise.

Here is your challenge, J.J. Abrams: Bring to the large screen what you have already brought to the small screen. Star Wars and the world of sci-fi blockbusters needs it. You have the opportunity for great good.

More thoughts on the lady(s) of Star Wars:

Let’s Talk About This Leia Thing from Geeky Vixen

Side Note 1: For thoughts on women in Doctor Who, check out this post on rebeccamoore.com

Side Note 2: A couple of my friends from working at camp are in need of some help.

Teryn Gray has gotten into Tish, a high-end acting school in New York, but is lacking the funds needed to attend. She started a Go Fund Me campaign. She’s a fantastic lady, and has great potential. If you can help that would be great. Check the campaign out here. If anyone can help by donating even a dollar, that would be great.

Cassie Turner is the Camp Director for a camp out by Las Vegas (but in a cooler location). If you know of anyone who likes the outdoors, children, and has their summer open for the intense but fantastic journey of being a resident camp counselor, e-mail me at lpalmer@lpalmerchronicles.com for more info. She has a few positions open. I’ve known her for about 10 years, and one summer with her is worth the adventure.

Side Note 3: Star Wars: Battlefront III is coming…. (I might actually be more excited about the game than about Episode VII)