Welcome to a new recurring post: The Monthly Snapshot 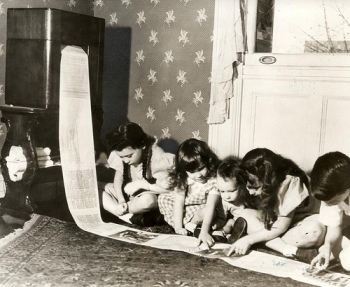 This post is written partially for my sister Natalie, who is currently on an 18 month mission for The Church of Jesus Christ of Latter-Day Saints (Mormon). She is in Panama working to inform people about her religion and provide service to the community.

My sister Natalie, helping other people.

Including her, there are about 75,000 Mormon missionaries serving 18 to 24 month missions. In their day to day adventures, they have limited access to the news and current events. When they return home, there are a few events of importance they may have heard of briefly, or not heard of at all. When it comes to popular culture, they only know what they’ve overheard on the street and seen on billboards.

I am sure there are other similar groups who are abroad on adventures serving others – deployed soldiers, members of the Peace Corps, people abroad providing service for non-profit organizations, and on and on.

When people return from such intense experiences separated from average daily life, it is similar to when Bilbo returns from his long journey to Lonely Mountain and back. He has seen things those at home could barely imagine, had life-changing experiences, and proved himself braver than he ever believed he could be. Yet, when he returns home it may be helpful to know of any tensions between the Sackvilles and the Brandybucks, what everyone’s been reading, and what the latest culinary wonder is.

The goal of this project is to take a snapshot of the month’s events, basically a Cliffsnotes version of current events and popular culture. If there are any events you think will be helpful to know in 1-2 years, please mention it in the comments below.

DISCLAIMER: I am trying to report things as factually as possible. While a few items will have opinion, most things are listed as honestly as possible. Also, some of the music, television, or movies listed have more adult content than what I’m a fan of.

Okay, we do have a lot of water here in California, but it’s mostly sea water. It’s not very good for drinking.

Side Note: Here are some of the shenanigans my friends and I got into during Saturday’s Nerd Night (Including a stirring reading of William Shakespeare’s Star Wars).

An epic round of Telestrations, involving pictures of mythical creatures.

The dogs watching out the window as the epic lightsaber battle ensues.

Boba Fett fell down, but he will get revenge with his lightsaber.