Each week, The L. Palmer Chronicles uses The Mystical Crystal of Awesome to open up a portal through the universe to bring you a member of The League of Scribes. Otherwise known by her Code Name: Next Jen This is an actual nickname given to me several years ago. Back when I was working at GameStop, each year we would go to a managers’ conference. That year we were learning about the newest video game systems. One of my fellows next to me said aloud, “Oh look, I’m sitting next to Jen!” From there the entire table agreed to call me Next Jen, and it sort of stuck. I use this nickname online for the most part.

A born and raised Floridian, Jennifer Kibble started to write in the fifth grade. She wrote short stories and poems, as well as two book series. For many years, it was only a hobby. Jennifer used writing to pass the time and to take her mind off of the reality around her. As a pre-teen, Jennifer developed asthma. While also living in a rough neighborhood, writing was a gift. Then a switch turned on within her. Jennifer no longer wanted writing to be just a hobby. Thus the Phoenix Element young adult series was born. When Jennifer is not living the life as an indie author, she is a cook at a local casino. She enjoys playing video games, reading, and is currently learning how to draw.

A Sample of Jennifer Kibble’s Work:

Phoenix Element is a fantasy adventure book series directed for young adults. It deals with magic, reincarnation, and beings from another plane of existence.

First we have Normality Twisted, which kicks off the adventure. There is an attack at a local mall. Anya and her babysitting charge Miles are thrown into a portal to another planet. Here her memories of a past life begin to surface as she begins to battle the entity within her.

Mages of Vane casts a temporary light on the situation. Anya is taking magic classes at the Vane Magic School. She assumes that she is free of the Rayasha that was once trapped within her. Anya soon discovers that she is standing at the beginning of a war between mages.

As mentioned before, it is targeted to young adults. But anyone who likes magic, and adventure would enjoy this read.

A draw my inspiration from the music that I have playing in my ears. Most of it comes from my dreams. Ideas and dialogue tend to flow when I’m asleep.

Yes!! I have to have music playing when I write. I try to find the song to fit the mood. I even made an unofficial soundtrack for Mages of Vane (click here).

Starlight Crystal by Christopher Pike. It is my favorite book when I was younger and still sticks with me today. Currently it is Margaret Weis and Tracy Hickman, authors of the Dragonlance series.

Would you rather ride a galactic unicorn or a space dinosaur?

Galactic unicorn. It sounds more majestic. Besides, I would laugh at the space dinosaur’s little arms. Might fall off. Oh! A galactic unicorn reminds me of Rainbow Brite, one of my favorite cartoons as a kid.

I was walking around the Saturn V Center after hours. My gut told me that I should start writing again and from that moment, I did. Let me rewind a tad. I was one of 150 Twitter followers that was picked to take part of a NASA Tweet-Up (now called NASA Social). I was there when the space shuttle Discovery finally launched in 2011. Everything about that event struck a chord within me. It told me to do what I love and don’t let go.

I try to plan out the main plot points and write them down. Sometimes I go months without writing, sadly. Once I do start going, the characters tend to pull the story in the way they want it to go.

Write for yourself. Push away thoughts about pleasing everyone else. This was one of my main problems when I started. The pressure will drive away the creative juices, causing a possible writer’s block. At least for me it did. Once I started to write for myself first, the words started to flow. Once the first draft is all said and done, then edit and rewrite for your readers. 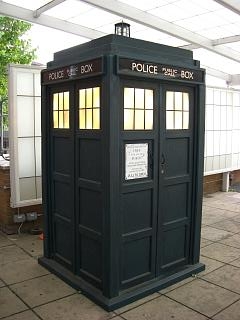 A Tardis from the Doctor Who TV series. The ability to travel anywhere in time and space! How could I not pick this.

To explore the worlds Jennifer Kibble has created, check out the book below:

To Interact with Jennifer Kibble, check out the links below: