As you may have noticed, the third trailer for Episode VII came out last night. I might be excited because I have a paper due tomorrow, but, instead, I am writing this to share how AWESOME it is.

Even if the movie isn’t great, we will always have this trailer.

I have brought together all three trailers in this blog and will now explore what we have learned from each.

Trailer 1: In Which We Are Introduced To A Sweaty Stormtrooper And A Lightsaber With A Controversial Hilt

Someone with a cool, deep voice (probably voiced by Andy Serkis) is a bad, bad villain.

There is a desert planet (which other sources name Jakku, and some theorize is a renamed Tatooine. What’s the beginning of a Star Wars Trilogy without good ol’ Tatooine?) 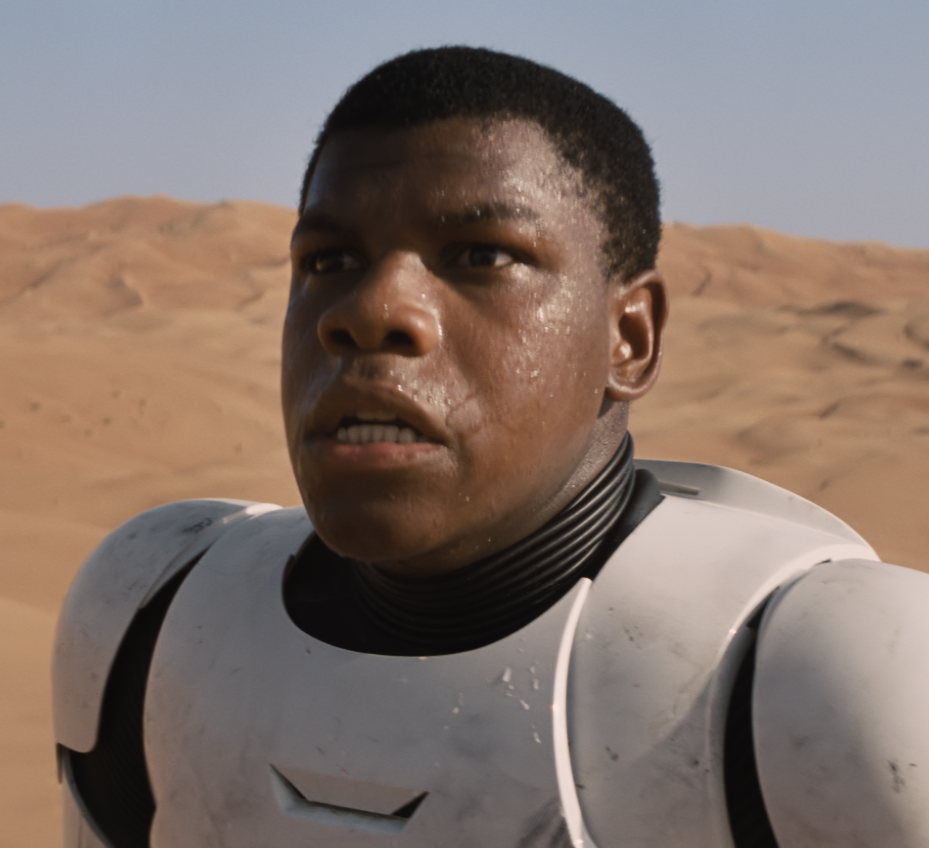 Diversity!!!!! A black stormtrooper? Are there other non-Caucasians in here, who are not dressed up as aliens? Maybe!

The Empire is still going strong, and has updated their stormtroopers to have sleeker, shinier armor

X-wings haven’t been updated, but look cool flying over water and creating a nifty spray-tail

There’s a booty-kicking girl in the movie, and she gets to ride a clunky speeder-box-thing

LIGHTSABER! With a hilt!…?! Is that cool? Is that ridiculous? I don’t know… but, somehow, I love it.

The Millenium Falcon doesn’t need anything to still be cool, but loop-de-loops are fun.

Wait, we still have to wait another year for this? (At the time)

Trailer 2: In Which We Hear From Our Old Friends Luke, Han, and Chewie

The Jedi Theme always makes me tear up a little bit

We get a small glimpse of Vader’s burned helmet, along with Luke’s voice over

We get a glimpse of R2-D2, and a cloaked person with a robot hand – who, I hope, is Luke There are lots of cool spaceships, explosions, lightsabers, and sweaty people That’s a lot of stormtroopers, and they look well-maintained. That Empire is looking healthier and healthier, which is not good for the rebellion The Millenium Falcon is still cool.

The Millennium Falcon is even cooler when Han Solo and Chewie show up – and the world cheers. (My Dad let out a, “Yeah!” when he saw that part.)

Trailer 3: In Which We Get A Brief Peak At A Bunch Of Characters, And Then Things ASPLODE!

We get a brief one-line teaser about Rey, Finn, and Kylo Ren (Adam Driver) – the first is no one, the second doesn’t believe in being a stormtrooper anymore, and the third is a crazy bad dude who’s got an obsession with Darth Vader’s helmet.

Rey gets the Boushh Leia treatment in cool desert-scavenger gear, and the robot-soccer-ball is her buddy

The Millennium Falcon is still cool – I am so excited for SPACESHIP BATTLES!

Finn and Rey get to hang out with Han Solo on the Millennium Falcon, but, apparently, no one talks about The Force and the Light and Darkside anymore. Hopefully, that clears up any discussion of midichlorians.

Hyperspace has more lens flare when brought to you by J.J. Abrams.

Lightsabers look cool in the rain.

Finn and Poe Dameron (Oscar Isaacs) become friends, including a bro-slap on the shoulder

Someone dies somewhere rainy and Rey is really sad about it.

Han Solo and Chewie get caught as prisoners, again.

BB8 is an astromech droid – which means he can help fly a spaceship, and win at soccer.

Han Solo and Princess Leia give each other a hug.

We get our first real glimpse of Finn with a blue lightsaber, and he fights Kylo Ren – without his hood and mask on (that looks like hair to me).

This trailer was awesome.

However, there is a significant of look, which is most obvious when looking at the official movie poster. Where is Luke? We know Mark Hamill was in the movie, and had to grow a beard. What is Luke up to? They can’t just have Luke grow his beard and then be killed.

I am excited, though, that there’s a girl at the center.

If you could bring back one obscure character/object/creature/thing from the original trilogy into the new one, what would it be? (I’d go for IG-88, the assassin droid). (Ok. Now back to our regularly scheduled homework).