In case you missed it, here is the trailer for Maleficent:

What do we learn from this trailer?

1. Maleficent lives in a world where Middle Earth meets fairy tales – including an army of Ents.

This will also probably set up a man vs. anthropomorphized nature paradigm.

2. King Stephen, instead of being a worried father and cartoonish fellow, will be a warrior with a dark side, and will do something that makes Maleficent really, really angry.

Perhaps, Stefan turns evil because he too decided not to destroy the One Ring. 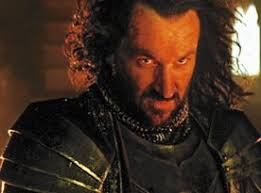 Isildur deciding not to destroy the One Ring in the fires of Mt. Doom. (Fellowship of the Ring)

3. There appears a warm connection between Aurora and Maleficent from Aurora’s childhood, something that turns to fear later.

4. Maleficent had wings, but somehow lost them – and apparently Stefan was part of the problem.

5. Angelina Jolie looks super cool as Maleficent, and does an excellent job both physically and vocally taking on the intimidating and impressive performance from the original cartoon.

The main question remains: Will it be good?

Based on the trailer, there is a firm chance. Hopefully, the filmmakers have learned from Alice In Wonderland and Snow White and the Huntsman. Both films had good moments, and great potential, but got lost in all the shininess and CG imagery. Instead of telling a story, they ran through a few tropes, a few non-sensical plot shifts, and came to a rather messy, confusing, and generic end.

I am hoping this will be a good movie, because it is a modernized fairy tale with a female lead over 30. Whether villain or not, that alone is something to celebrate.

Other Thoughts On The Trailer:

17 thoughts on “Maleficent: Revenge Of The Trailer”