You and science-fiction television have a complicated past.

For years, the X-Files brought us aliens and monsters mixed with good story, flourishing as best it could on your network.

In time, you decided to give Joss Whedon a shot at another television show. You launched Firefly in a scatter-shot of episodes, the serialized story getting lost by being aired out of order and at changing times.

One season and a movie!

Firefly was treated like a spaceship losing fuel and about to explode as it was sucked into a black hole, instead of a series which could potentially revitalize tales taking place among the cosmos (thankfully, Battlestar Galactica and Doctor Who have since helped ease this burden.)

And then came Fringe. 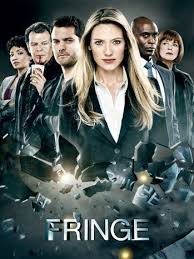 This show was treated better, the episodes broadcast in order. It seemed a lesson on releasing more sci-fi into the universe had been learned. Even when ratings lacked strength, you recognized the robust fandom, and let the show come to a satisfying conclusion at a respectable age of 5 seasons.

People had come to your network to experience the strange, the supernatural, the complicated stories involving John Noble being an awesome actor, the chemistry between the two leads.

And so, in the 2013 television season, you bestowed upon the world two science fiction series: Sleepy Hollow and Almost Human.

First, thank you for adding more good sci-fi to television. I believe I speak for many nerds, geeks, and other fans of the weird, supernatural, and technological, when I say we always can use one more show that blends the spectacular with good storytelling.

Thus far, both of these shows contain:

However, Sleepy Hollow is being treated even better than Fringe. It is being set out in the middle of the garden, being carefully pruned and watered as it grows a robust and ardent fanbase. (They also both have John Noble. Definitely a plus).

Almost Human, on the other hand, is receiving the same treatment as Firefly. It is being pushed into a dark corner where it is neglected, receives little light, and then being asked why it does not grow.

With a combination of a consistent time-slot, a serialized story-line that is being shown in order, and strong chemistry between the lead characters, Sleepy Hollow is doing just fine. During the 13 episode first season, it has achieved a 4.4 rating among adults 18-49, and between 6-7 million viewers per week. In a world of DVR and online video, these numbers are impressive.

Sleepy Hollow has earned its success. The storylines are suspenseful, engaging, and embrace plot lines and monsters that if pushed just a little further, would be completely over the top. The show works by being grounded by the two lead characters, Ichabod Crane (Tom Mison) and police Lieutenant Abbie Mills (Nicole Beharie) and their odd-couple chemistry. Not only do they respect each other, they actually reveal to each other essential information.

Any show that can make a good narrative out of the apocalypse, demons, and a Revolutionary War soldier who has woken up in modern America is impressive. In fact, Sleepy Hollow is a great successor to Buffy The Vampire Slayer.

Almost Human is a great television adaptation of Blade Runner. While the early episodes feel like a typical cop show with a few shiny things thrown in to make it sci-fi, the later episodes take modern technology and ethical questions and push them into the future. The two lead characters, Detective John Kennex (Karl Urban) and his android partner Dorian (Michael Ealy), have as great of chemistry as Crane and Mills of Sleepy Hollow. As their relationship develops, Dorian’s ability to feel emotions, to sympathize, to care, pushes Kennex’s beliefs and his patience. What could be a flat, “look at this shiny tech of the week” show is quickly becoming nuanced, suspenseful, and intriguing. Most episodes are like a short movie, taking the audience at a breakneck pace until a compelling conclusion.

The show’s progression and improvement, however, are obscured because it is being aired out of order.

As mentioned, Sleepy Hollow is doing fine in the ratings, and will rise up again next fall to take us on another thrilling ride toward the apocalypse. Almost Human, however, is bleeding battery fluid and may barely make it to the end of its first season.

Don’t kick a robot when they are down.

So, Fox Network, I am asking justice for a good show with great potential. I am asking for you to not only grant Almost Human a second season, but also to air the second season in order. If it fails, let it fail by its own merits. If it succeeds, you will have the opportunity to add another successful panel to Comic Con.

Or, in the words of one of the most passionate of current fan bases: “Six seasons and a movie.”

Someone who watches far too much television. Especially sci-fi television.

P.S. Thank you for putting us and The X-Factor out of its misery.

Have you watched either show? What shows have you loved that have been gone too early? What shows should have left before hand? Would you rather hang out with Karl Urban as Doctor McCoy, Eomer from Lord of the Rings, or as Detective Kennex? Is anyone else glad Ichabod Crane got some fresh clothes during the last two episodes (still period, but at least new)?

A review of a great Almost Human episode form roboheartbeat.com

And an overall review of Almost Human from The Triple Option

A review of “Disrupt” from Almost Human, from Channel Chelsea

Theology In Skinny Jeans from Thinker For Hire

A review of “The Golem” episode from Sleepy Hollow, from Lady Geek Girl And Friends

19 thoughts on “Fox Network, Please Treat “Almost Human” Better Than Firefly (But, Thanks For Sleepy Hollow)”