Welcome to the Second Annual Watched In Theater (W.I.T.) Awards!

This awards ceremony is brought to you by Squirrel Cinema.
All of our movies are nuts.

2013 has come to an end, which means it is time for the Film Award Races to begin. The Golden Globes and The Oscars attempt to honor movies that push boundaries, wrench at your heart, and make the audience question their entire existence. There are many great films nominated this year, but due to a lack of time and funds, among other reasons, I have not seen any of them.

The goal of the WIT (Watched In Theater) awards is to honor the movies I have actually seen in the theater. You are welcome to share your own personal WIT awards in the comments below.

Round 2: The Nominees In Order Of Actual Quality…

While the Razzies had greater movie disasters to nominate this year, this film has one redeemable quality…

While Ewan McGregor’s hair is questionable, his character is the only one with a genuine personality. If the movie had been about him going on an adventure, it could have been at least somewhat enjoyable. However, the film focused on gross, generic giants, a bland main character, a princess who gets to wear armor, but runs around screaming instead of fighting, and a tragic mis-use of Stanley Tucci.

I bravely convinced my brother and one of my sisters to see this with me at the $3 theater, hoping it would be another surprisingly awesome movie like Mirror, Mirror. However, the bad reviews proved to be accurate.

I hereby publicly apologize to my siblings, and hope to be more careful in the future.

I am happy to report the rest of the films on this list are at least good.

While I am less passionate about Minions as other people, I am not immune to their adorableness. Both Despicable Me and Despicable Me 2 are good films that hover just on the edge of greatness, but don’t quite make the leap. There are a few places where the need to use 3-D technology wins out over story, and a few spots where plot and character do not quite mesh.

That being said, this is a fun, silly, and enjoyable film. Gru is a great dad, El Macho an exciting character, and the three girls are individuals and adorable. My two favorite things in the film are when a character is tied to dynamite tied to a shark tied to a rocket and then sent into a volcano, and also the guacamole hat. I don’t like guacamole, but that hat is amazing.

Thor 2 is definitely better than the first movie, but still falls in the pretty good and not great category. The side characters are far more interesting and charming than the main characters. Chris Hemsworth as Thor is manly, dashing, and noble, and a great leading man. However, whenever Loki (Tom Hiddleston) is on screen he steals all the attention. His calm and cool reactions to chaos, his deep-seated rage, his banter with Thor, are all compelling and fun. He is a great villain.

Outside of Asgard, Darcy (Kat Dennings), Jane Foster’s assistant, along with her own intern Ian, and Dr. Eric Selvig are more interesting than Natalie Portman’s Jane Foster. She lacks a real purpose besides being love-sick for Thor, and having swooshy things go on in and around her. While Natalie Portman is an admirable actress, she lacks Ewan McGregor’s skill for elevating a weak or bland character. I think it is hard to contest that Obi-wan is much cooler than Padme in the Star Wars Prequels.

Besides Loki, my favorite part of the movie are the spaceships of the Dark Elves. They are cool ships, and I enjoy how they ram into things in addition to blowing things up. I’ll had that to my Spaceship Wish List.

While fans of the comic book series may question some of the choices the filmmakers made, as a film, these choices hold up and build a fun, fast-paced ride. Where Thor: Into Darkness and Despicable Me 2 are good movies that need a little polishing, Iron Man 3 pulls all of its elements together into one cohesive story and world.

Much of this rests on the charisma, charm, and humor of Robert Downey Jr. as Tony Stark. His rapid-fire, witty banter with other characters, particularly a kid who helps him, helps build the fun pacing in the film. Also, he is a great hero because he seeks to overcome his own imperfections. His imperfections play into the action scenes, and many of them are with his suit malfunctioning, or a cobbled-together version of his suit as he tries to survive. When something doesn’t work, he rolls with it and improvises, bringing a lightness and cleverness to each action sequence.

It’s not the best movie ever made, but it is solidly fun.

Star Trek: Into Darkness is far from a perfect film. It hovers between trying to push into new territory, while nodding back to Star Trek’s extensive canon and history. For most of the movie, it succeeds, while a few moments don’t quite work. While Benedict Cumberbatch was great, he would have served better as either an all-new villain, or as one of the god-like villains from the Original Series, like George Mitchell. He is great as a calm, deadly man until pushed into his rage and hatred. Another missed opportunity is the look of the Klingons. They just look dumb. Klingons should look like this:

However, similar to Iron Man 3, Star Trek: Into Darkness is a fun ride. It remains true to the main characters of Star Trek, while building implications of the new universe. Both Chris Pine and Zachary Quinto continue their banter-filled bromance as Kirk and Spock. Where the film really succeeds is when bringing action into space, of using spaceships and all the shininess a J.J. Abrams lens-flare can muster. 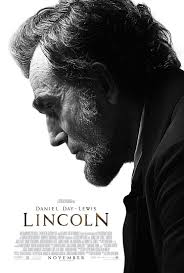 Lincoln is a truly great film. It builds a portrait of the president within a tight time-frame. The stakes are impossibly high, and though we know the eventual outcome, there are moments when it appears all hope is gone. However, the film is about perseverance, doing what needs to be done, and reaching beyond oneself.

Daniel Day-Lewis’ Lincoln is surrounded by a great array of characters, each interesting and bringing individuals essential to the abolition of slavery alive. Both James Spader’s W.N. Bilbo and Tommy Lee Jones’ Thaddeus Stevens are colorful, fascinating men. Sally Fields brings life and sympathy to the historical figure of Mary Todd Lincoln. Joseph Gordon-Levitt’s Robert Lincoln serves to show the perspective of young men during the Civil War, while also giving us a chance to see Lincoln as a man.

In other words, this is yet another great film in the series of historical films directed by Steven Spielberg.

Winner of Best Bobbed-Hair Contest.
That’s not a joke. That’s really what this picture is from.

While Iron Man 3 has a few less plot holes and Lincoln is unquestionably the best quality movie on this list, I will remind you of Judging Criteria #2 – Would I watch them over and over again? The answer is I’d watch them more than once, but I wouldn’t wear out the DVD player like I would with Star Trek: Into Darkness. And why? Because…

I have decided spacesuits are a type of spaceship.

And because Benedict Cumberbatch is awesome as a villain (maybe not as Khan when compared with Ricardo Montalban, but compared with other Star Trek villains)

And, because this is probably the most space action sequences we will see in a single movie until December 18, 2015. (Note: Thor has cool spaceships, but all the action is on some form of a planet. It’s really more interplanetary action, which is cool, but not as cool as space.)

As I said months ago, this is a great trailer for Star Wars Episode VII. Only about 700 days!

How about you? What were the best movies you saw last year? What is the name of the movie the squirrel above is filming?)

Movies from last year I’m still planning to see: Man of Steel, Ender’s Game, Gravity, and Frozen. I’m up for any other suggestions.