I have just completed a four-year mission to boldly watch what I have never seen before: The entire Original Series of Star Trek.

It has not been an easy journey. I began as CBS had the show available for free online, and then transferred it to Netflix and HuluPlus, dividing me from the Enterprise with a pay wall. However, I persevered, taking the time when current shows were off the air to pay a monthly fee and venture to the final frontier. I have learned a few things along the way. For example, a Vulcan neck-pinch, or just having a Vulcan along, will solve most problems. For other problems, bring along a grumpy medical doctor. If things resort to violence, and if you don’t have a Vulcan with you, just use a double-fisted overblow.

Also, when exploring outer space, always send your Captain, First Officer, and Chief Medical Officer into unknown dangers. While the ship would be without its top three officers if they died, they have a higher survival rate than the lower-ranked officers who sometimes join them.

Now that I have completed this journey, I wanted to share my top five episodes of the series. These aren’t the ‘best’ or most ‘influential’ episodes. These are the episodes that stuck out to me the most, and will come up in conversation later.

Charlie X is the first of many “God” episodes. Besides bringing us the complicated character of Charlie, a human teenager with super-powers (not always the best plan), it takes us around the ship and introduces us to the life on the Enterprise. We see Spock and Uhura singing and playing music, Kirk exercising, and some of the flirtation going on in the halls. This is also an episode that features the unsung character Yeoman Rand. Any woman who can appear to take herself seriously despite wearing a beehive and her main job being to serve coffee deserves a shout out.

Don’t mess with a girl with a beehive. (Also, don’t become a repeated love interest for the Captain, or your character will disappear from the show.)

Altogether, a fine episode demonstrating a little of the silliness and a base for the gravitas the show can bring.

In this episode, Commodore Decker of the USS Constellation takes over the Enterprise in a mad, hopeless pursuit of the doomsday machine that destroyed his ship. He is mad with the lust for revenge, and risks everything for it, even the entire Enterprise and its crew.

Altogether, it is a simple episode. There are no fancy sets, much of the suspense is Decker glaring madly at the monitor. Yet, it is compelling. Each moment, his unpredictability tightens the screws of tension, while Kirk tries to use his wit and ability to persuade to save the Enterprise. This is a great episode.

Of Robots & Kirk In Love Set’

This is not a great episode, yet I love it.

Ok. This episode is actually terrible. But, I think, in our love and esteem for the great episodes of Star Trek, we forget how terrible many episodes there are. For example, almost the entire third season. There are racial stereotypes, Kirk makes out with a different woman each episode, and the plots are… either dumb, or make little sense. This episode brings together many of the less-great elements of Star Trek and falls into the uncanny space where something is just terrible enough to be fun, but not terrible enough to be painful. (See: Sharknado). After a random hot lady appears on the Enterprise, she steals Spock’s brain. He is empty, devoid of his intelligence. Kirk and McCoy have to go to the planet and seek a way to restore Spock’s brain, while Spock walks like a zombie. The best line? When they decide to explain to the random hot lady what is happening, she says, “Brain? What is brain?” Yes. This is set on a planet populated by beautiful women without intelligence. Despite the presence of Uhura, Nurse Chapel, and a few other intelligent women throughout the series, this is the more common portrayal of women. (Special note: For anyone who wishes to defend the portrayal of women overall on the show, watch Requiem for Methuselah first. – SPOILER – In that episode, a man builds a female android who discovers emotion. In the moment she gains the ability to make a decision for herself, she cannot process it and dies.) All that being said, this is my favorite terrible episode of Star Trek, because it makes me giggle every time. I think that is an important factor of Star Trek we must always remember. 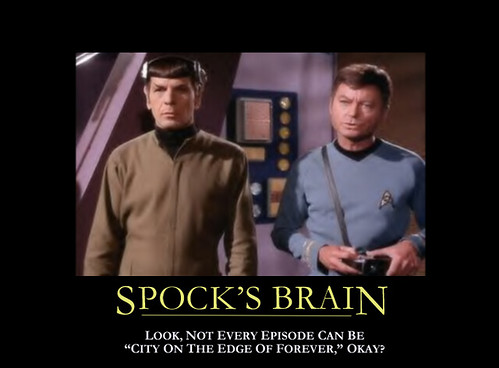 However, Star Trek does give us some great one-off female characters.

Edith Keeler, despite having to die to save the universe, is a great one off character. Yes, she falls in love with Kirk, but she remains her own force and power. This episode also brings some of the moral dillemmas many complain are missing from the Abrams Era Star Trek films. Kirk has a choice: save the woman he’s fallen in love with, and ruin the future of the entire human race, or let her die, and save the universe. It also successfully portrays a time-period without falling to the shenanigans of other episodes (see: Spectre of the Gun), and builds a compelling narrative.

This is the episode I hoped Star Trek: Into Darkness was based on. Benedict Cumberbatch would have made a far better George Mitchell than Khan.

After passing through a space-whatsit, two of the Enterprise crew are infected by a field that gives them super-god-powers. One is George Mitchell, Kirk’s friend since the Academy, and this relationship is enough to build the tragedy of the rest of the episode. As George Mitchell is consumed by his godness, Kirk has to turn against him and is faced with the dillemma of stopping him. The episode pivots on this emotional battle between friends, and is an example of Star Trek at its greatest – when moral quandaries are mixed with personal relationships, building an intellectual conflict.

Yet, my favorite bit of dialogue is from The Cloud Minders late in Season 3:: Droxine AKA hot lady in capini (that’s a cape and bikini combo) has has just been introduced by her father as a “work of art” Droxine: “I’ve never met a Vulcan before” Spock: “Nor I a work of art.”

A work of art?

I never realized Spock had such fine moves.

Note: The posters for each episode above were put together as a project by Juan Ortiz. You can learn more about it here. Side Note: Speaking of Star Trek’s legacy, I don’t think we would have this upcoming film without it. Here’s the latest trailer for Christopher Nolan’s Interstellar:

16 thoughts on “My Top 5 Episodes – Star Trek: The Original Series”