First, Captain America: Winter Soldier is a great spy movie disguised as a super-hero film. While I was watching it, one of my first thoughts was, “When did we get to Metal Gear Solid?”

[For those unfamiliar, Metar Gear Solid is a ridiculous but awesome spy game franchise.]

Jumping out of a helicopter-like vehicle? Check. 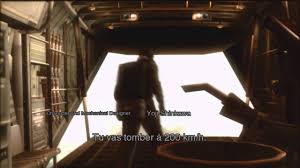 Giant robot-vehicle designed to travel almost anywhere and kill bajillions of people at once? Check. In addition there are:

Maybe these things are in a lot of action stories, but… Captain America is a great mix of spy action, the super hero fantastic, and political thriller all packed together in a tight, well-paced story with the main character still at the center.

This Is Not An Origin Story

While the filmmakers have given small moments for the audience to catch up, they expect the audience to have a working knowledge of SHIELD and Captain America himself. The hero isn’t bogged down with learning how to become. He simply is Captain Steve Rogers, a super-human soldier. This keeps the film clipping along from start to finish, simply telling the story without worrying about attaching the audience to the hero.

In addition, there is no origin story for the villain. Yes, there is brief background, but this is summarized in a brief set of dialogue here and a quick montage there. More on this in the next section…

Many super hero films (i.e. The Amazing Spiderman 2) like to bring in several super villains and tie them together in a one-off tale. Much of the movie gets weighed down with not only the hero’s origin, but also in setting up the villain’s origin.

This film expects the audience to already know enough about the villain to not need some origin story. The origin does not matter much: We know Hydra. We know it is dangerous and deadly. And now, we learn it has been spreading like a virus in SHIELD (this twist, by the way, is what has made the last 1/3 of the first season of Agents of Shield great).

In addition, The Winter Soldier is a great force in the movie. He is both sympathetic, and yet ruthless and a formidable opponent. It is often said a hero is only as good as his villain. Therefore, The Winter Soldier makes Captain America a greater hero.

[Also, I have loved Sebastian Stan as an actor ever since the first seeing him a good but short-lived show called Kings, and was extremely excited to see him as the Mad Hatter on Once Upon A Time. Besides being handsome with amazing cheekbones, he brings an excellent brooding darkness to all his characters. I am sure we will see more of him.]

This is also a clever movie, with great one-liners, a bit of repartee, and allows itself to have fun. I love the scene where Nick Fury is attacked, and he asks the computer for his spy-car, “What does work?” and the computer answers, “The air conditioning.”

While all of his friends are gone, he is still upbeat and friendly. He doesn’t wallow in sorrow. He isn’t dark, brooding, and full of angst. Even when things are going terribly, he remains positive and willing to keep up the fight. He looks to the future and what is right, and keeps pushing toward that goal.

In short, Captain America is a nice, upstanding guy, which makes him a hero worthy of rooting for.

I am really glad that after convincing my feminist-twelve-year-old sister to see the movie by saying, “Black Widow is in the movie,” that the women were treated well.

For a modern blockbuster, 4:6 is an unfortunately fantastic ratio.

Even though several of the women have hints of romance with the hero, there is no actual romance in the film. Instead, each of the women is independent, intelligent, and gets their work done (even post-alzheimer’s Peggy Carter has a key purpose).

They are equals with the men, none of them sad damsels to be rescued as they swoon. Instead, they are out fighting and working toward the defeat of Hydra.

They are also not over-masculinized, and turned into fan service vehicles of hotness. Yes, Black Widow’s uniform is tight, but so is Captain America’s… and, during the major climax of the movie, she’s doing martial arts in a business suit.

What a miracle it would be if more Hollywood Blockbusters treated women this way.

About ten minutes into the movie, the movie blipped, the screen went dark, and the lights went on. Then, the trailers started over again.

Yes. That is right. We had to sit through this:

(At least there’s a robot dinosaur. For 15 seconds.)

This probably added an extra half-hour to the film, making it feel longer that it is.

The upside is, my friends who were running about 15 minutes late were able to see the whole film…

Fortunately, this is an individual problem, and should not effect other people’s experience watching the movie.

When she broke out in kung fu, I really wanted it just to be her, and was a little disappointed when it turned out to be Black Widow. It builds to great plot points and action, but it would have been awesome to see a woman over 40 getting an action hero moment.

The Movie Felt A Little Long

But, I think this has more to do with the circumstances of it starting over. There’s a whole lot of story, and it’s a good ride.

Really, I enjoyed the movie, and I’m stretching to come up with some criticism…

What To Look Forward To

[As well as DC Comics and Warner Bros trying to play catch up, with upcoming TV shows such as Constantine, The Flash, and Gotham (and Arrow seems to be doing just fine).]

In short, if you haven’t seen this movie yet, and you like a good spy-action-super hero story… 1. I may have just ruined some plot twists for you, but… 2. Go see it anyway.

Side Note 1: I should confess the Metal Gear reference may be due to missing my brother who is on a LDS mission in Oklahoma. None of my other siblings have played the games, and don’t fully appreciate when I mention feasting on the meat on a tree frog.

Side Note 2: This week, William Shakespeare’s The Jedi Doth Return by Ian Doescher has been released. I’m very excited. I have the first two, and they are AMAZING!

Side Note 3: Have you read the latest about Harry Potter? Go to pottermore.com and read what Rita Skeeter has to say.