In Part 1 (here it is for anyone who missed it), I discussed travelling in the real world, and the long, endless hours we can take.  Great authors realize the lack of drama in hour-by-hour journeys, and find ways around telling the ‘boring parts’.  Tension is built by the continuous threat of some antagonistic force, be it Nazgul on your trail or a car which keeps breaking down before exploding in flames.  In the hands of a master storyteller, a trudging journey between point A and Point B can become fascinating.

As I mentioned in Part I, I read The Return of the King before the rest of the trilogy.  The book made little sense on its own, but I distinctly remember being engrossed in how hard and arduous Frodo and Sam’s journey into Mordor is. It is the struggle for survival, the lack of sustenance and water which makes the journey great.

However, as the Youtube video “How The Lord of the Rings Should Have Ended” has pointed out, Gandalf could have just called up his friends the eagles, had Frodo fly over Mount Doom, drop the ring in the volcano, and flown off.

There goes months of traveling, hardship, the near-destruction of Rohan and Gondor, as well as the enslavement of the Shire.

And there goes a compelling narrative.

In a well-written story, the mode of transportation needs to match both the world and the needs of the narrative.  In Star Wars, the Millennium Falcon only fails at the worst possible moment as the entire Empire fleet is bearing down on Han and company.  In Iron Man 3, Tony Stark’s suit goes through phases of breaking, misfiring, or over-compensating. While it is able to swiftly get him in and out of danger, it is not always at the right time or in the expected way.

To go back to Lord of the Rings, Frodo and Sam’s plotline is a journey narrative, while much of the rest of the character’s stories are political and/or war stories.  There is a reason Tolkien spends much detail on Frodo and Sam’s plight as they cross the endless miles of Mordor, but swiftly moves Gandalf and Pippin from Rohan to Gondor via the horse Shadowfax.  Gandalf and Pippin must move with great haste, hoping to reach Gondor before Mordor attacks and Sauron figures out Pippin does not have the ring.  They do not have time to go through darkness and suffering.  They just need to get to their destination.

In order to characters just need to get from one point to another, many writers have come up with interesting solutions.  Here are a few:

This effect brought to you by: glitter in a glass of water 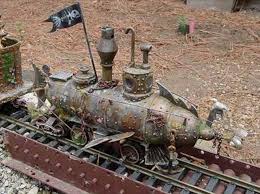 I want to go to this dog’s dream space.

When traveling through fiction, sometimes, it’s the destination which counts.  However, as a writer, we can make the world much more interesting by dabbling in various methods of travel, and then building new quirks and ideas on what others have already done.

What is your favorite method of travel?  If you could have one fictional vehicle, what would it be? (Mine would be Boba Fett’s jetpack.  The spaceship would be cool too, but the jetpack more practical on Earth.)  Do you have creative methods of travel in your story?  Which method of travel would be most terrifying if it were on fire?

From Dragons 8 My Cats

The Best Way To Travel Through Fantasy Worlds

The Fantasy Map from More Than One Page

Napoleon Versus The Fantasy Map from Brian Staveley

Side Note: Here’s a rough sketch of the map for my current Work In Progress.  It’s not as detailed as I like, but it is a helpful tool for determining the world, plot, and methods of travel.

15 thoughts on “Maps And Getting There And Back Again: Part 2 – Fictional Modes of Travel”