In case you missed it, here is the trailer for Thor 2: The Dark World:

What do we learn from this trailer (and know about the movie from other sources)?

1. They are not using “The Theme Of The Dark World” from Zelda.  Definitely a missed opportunity.

2. While Benedict Cumberbatch is taking the Star Trek crew “Into Darkness,” “The Dark World” is occupied by the 9th Doctor: Christpher Eccleston.

The Doctor is now a cursed elf-Lord.

Therefore, you must be British, and preferrably have starred on a BBC show written by Steven Moffat in order to be a truly epic sci-fi villain in 2013.  (Ben Kingsley, as the Manchurian, is only British).

3. When preparing to enter The Dark World, make sure you’ve grown your hair longer.  For example:

Maybe they are hoping to use their hair as a secret weapon?  (And, yes, Natalie Portman’s hair is negligibly longer.) 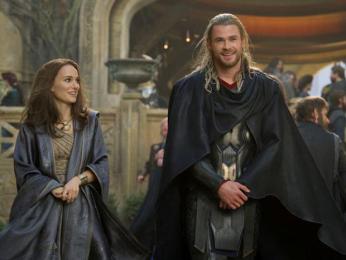 She also gets to wear armor, which is awesome, and, hopefully, she actually gets to use it.  Also, I believe she will have better dialogue than in Star Wars.

5. Tom Hiddleston once again plays Loki as a great anti-hero, and gets to have much more fun than Chris Hemsworth as Thor.  Although, Thor has far better abs.

6. While the Shakespearean-ness of Asgard may lower without Kenneth Branagh as director, the epicness should be maintained by Alan Taylor.  Taylor produces and has directed many episodes of a small show called Game of Thrones.  While I don’t watch Game of Thrones due to the “R” rated content, I do believe the praise for its epicness, and have faith in Taylor.

8. And, based on this poster, there will be rain, and it will look really cool.

9. Anthony Hopkins, as Odin, will have several epic lines of dialogue, such as the opening voice over for this trailer.

10. This movie will further cement Chris Hemsworth as a very manly dude.  I now want a Wolverine-Thor crossover.  That would be a lot of Australian-Manliness.

I’m looking forward to this movie, and hope it’ll be as fun as the first.  While Thor 1 is imperfect, it is a good time.  My expectations for Star Trek: Into Darkness are much higher, but this is still a movie I want to see in the theater.  Also, it’ll be fun to watch as Marvel/Disney build to the next crescendo of Avengers 2.

So, here’s looking to an epic November.

Which superhero movie are you most looking forward to?  If you could hang out with Thor or Loki, who would you choose?  Do you prefer Star Wars-Natalie Portman, or Thor-Natalie Portman?  Are Thor and Loki like Samson and get their strength from their hair?

Other Thoughts On Thor:

Marvel Hammers Us With New ‘Thor: The Dark World’ Stills and Plot Details from geeksofdoom.com

The First Trailer for Thor: The Dark World Debuts! from Straitened Circumstances by Tim Hanley

Thor: The Dark World Plot Details and Trailer! from World of Black Heroes

And an awesome portrait of Loki from awesomeshtart

Side Note: Here is a deleted scene from Patton Oswald’s cameo on Parks and Recreation (one of my favorite shows). In it, he describes an amalgation of the Star Wars-Marvel Universes, and more. In case you missed it, here’s my post on Disney planning to use the business model for Marvel for the Star Wars Universe.

Side Note 2: This weekend is a big, epic Girl Scout event I’m on the Steering Committee for, so if I don’t reply to your comment this weekend, wait till Monday.  Also, sometime next week, look for more info on this weekend’s epicness.