Before I begin discussing the films, I need to give some context as to the circumstances in which I watched the films. That’s right: You get a mini-travelogue and two film reviews.

Part I: Welcome to Rexburg, Idaho Actually, this is Idaho Falls, about 10 miles away.

Over Fourth of July weekend, I ventured north and visited good friends of mine who live in Rexburg, Idaho. Rexburg is the home of Brigham Young University – Idaho (sister school to the university I currently attend), two bowling alleys, two grocery stores, a smattering of college students, and local residents. In other words, to this Southern California native, used to moderate-sized cities being 100,000 people, and who currently works in Salt Lake City, it’s small.

(Rexburg also has a strange species of chair which apparently split like cells and reproduce on the Third of July along the parade route. Throughout the day, as we drove through the main streets chairs continued to appear. Some theories say people are so trusting in Rexburg, they set their chairs out along the parade route throughout the day. I’m sticking with the alien species theory.)

On Friday afternoon, my friends were deciding what to do, and so we went to one of the few attractions in the town: The Drive-In Theater (though, the Taco Bus is the best. Dang good tacos). My super cool friends hangin’ out with the old projector at the Drive-In.

That evening was a double-feature: Inside Out started at 9 PM and Jurrassic World started at 12:50. Thus, my opinion of Jurassic World is strongly prejudiced by 1. Watching it at a drive-in with good friends, 2. Not starting the movie till 12:50 AM, and, 3. Watching the movie after the light-hearted fun of Inside Out. This serves as a disclaimer.

I also should give Rexburg credit for being close to Idaho Falls, which does have a great fireworks show that my friends and I went to see.

Part 2: The Journey Through Riley’s Head AKA Pixar’s Inside Out

I think the best way to measure a Pixar film is how many tears are shed in between giggling. What has made Pixar so successful for so long is its ability to tap into the audience’s emotions and to create a bond between the audience and the characters. Judging by the tears shed throughout the film by one of my friends, I think Pixar succeeded in getting us to care about the emotions of emotions.

The overall plot of the film is light, with a mixture of mundane reality and then the exaggeration of reality within the world of Riley’s mind. There were a few points where character failure was predictable – it was too early in the film for the heroes to succeed – but, overall, it is a sweet, fun journey. It also made me want to hold a little tighter to my imaginary friends.

All of the emotions are fun, well-formed characters. The main character, Joy, is a fun, plucky heroine who has a lot of character growth, the best character in the film is Sadness, as voiced by Phyllis Smith. Sadness has a sweet innocence and honesty, while also being hilarious. I never knew I would care so much for sadness. 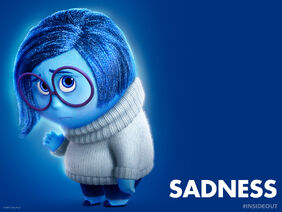 While not the best Pixar film (Up and Finding Nemo are still better), Inside Out is a solid addition to the canon. My only other caution is it’s a bit of an intellectual film – the brief journey through abstract thought was a great moment of art commentary – and I’d recommend it for kids older than 7.

Where the characters in Inside Out, whether human or emotion, are rich and detailed and interesting, the human characters in Jurassic World are just pawns and set pieces in a movie about dinosaurs smashing things, eating people, and eating each other. Even Chris Pratt’s handsome, dinosaur-whisperer bad-boy hero named Owen is a flat mix of action hero tropes, which are a waste of Chris Pratt’s comedic and acting ability. Although, he is pretty great at riding a motorcycle through the jungle with his raptor buddies.

This might not be exactly what’s in the movie.

In this movie’s attempt to have the gravitas and character development of the original Jurassic Park, it takes a third of the film before dinosaurs start eating people. Do we really need the two nephews and their family drama? Do we need romantic set-up between Owen and Bryce Dallas Howard’s Claire? Do we need any clue that Vincent D’onofrio [mild spoiler] is the typical militant idiot villain who is going to be a jerk and be eaten by the dinosaurs he is so excited about?

We just need dinosaurs. Where are the dinosaurs?

The first one we see is just a hologram! (Although, I would totally go on the triceratops-pony ride).

This would be like Episode VII not showing us a spaceship until 45 minutes into the film!

Perhaps because it was almost two in the morning by the time we finally saw the Indominous Rex, and I was in my car in a drive-in, my friends and I were rather over the movie by the time things start getting crunched and chewed.

Then, there may have been a lot of giggling as we played a game of “Who gets killed next?” We were fairly accurate. (Sorry random military goon.) We were also impressed by Claire’s super-powers of running from dinosaurs in high-heels.

And, the random guy who saves his drinks during a pterodactyl attack:  https://vine.co/v/eJdhOFddULw/embed/simple

Jurassic World is probably better when not begun at 1 AM, and, though I love dinosaurs, I don’t love big, scary man-eating dinosaurs, and might not be the best audience for the film. However, I did have fun watching the movie.

In short, Inside Out was better, but neither film will be winning the 2015 WIT (Watched In Theater) awards. The movie that will probably win isn’t coming out for another 147 days (though, I will be viewing said film with extreme prior prejudice). In the meantime, we can watch this:

Other thoughts on Inside Out:

Other thoughts on Jurassic World: (From people who are greater fans of the Jurassic Park series)

Side Note: I find it ironic that the above double-feature matches so well with the following trailer (which has the kind of dinosaurs I like):

Side Note 2: I still think this is a great parody trailer for Jurassic World:

13 thoughts on “A Double Feature Review: Inside Out and Jurassic World”